How to learn Hungarian by yourself? Start with an easy and free online course!

We have adopted an objective and efficient approach to learn how to speak a language easily and quickly: we suggest you to start by memorizing words, phrases and practical expressions that you can use in everyday life and that will be useful when traveling.
Getting used to pronounce words out loud, numbers for instance, is an easy exercise that you can practice often and at anytime throughout the day.
It will help you to get used to the sounds of your chosen language and thus make it more familiar.
And once your holidays have begun, in Budapest, in the picturesque Szentendre or elsewhere, you will be surprised how familiar and easy to understand it will seem.
Furthermore, using a pocket dictionary is always useful, particularly during a trip. It enables you to find the translation of new words and enrich your vocabulary.

Why speak Hungarian while traveling?

Do you know what the ballpoint pen and the Rubik's Cube have in common? Both are inventions born of Hungarian creativity!
Well developed in the field of research, the country has several universities, schools and laboratories from which iconic global figures of science have emerged, such as the economist John Harsanyi and chemist George de Hevesy, both Nobel Prize laureates.
And even if the field of research is not for you, you can savor the ironic and suggestive style of Imre Kertész - winner of the Nobel Prize for Literature in 2002 - or discover the work of Georg Lukács in its original form. All good reasons to dive into learning Magyar and to discover the subtleties of this agglutinative and harmonic language of the Finno-Ugric branch!

Good deals on the horizon

A mid-ranked power of the European Union, this Central European country has a population of around 10 million inhabitants, but also counts a vast Magyar population of almost 2.5 million Hungarian minorities in the nations bordering Hungary, in addition to significant emigrant communities in Canada, the United States, Australia and Israel. In addition, as one of the official languages ​​of the European Union, knowledge of this language could be a real asset if you were to apply for work in the EU institutions.

Make a success of your stay in Hungary

It is true that the reputation of this language precedes it, and although we can not deny that learning Hungarian can be arduous, the originality of its linguistic mix is ​​worth the effort.  By learning the vocabulary with its mix of Slavic, Latin, German, Turkish and Indo-Iranian origins, be sure to notice the seven pairs of long and short vowels as well as the 44 letters of its alphabet.

Written in the Latin alphabet, the language is composed of 44 letters, including seven pairs of vowels and 25 consonants, all of which can be long or short, with phonemic stress giving meaning. The Hungarian accent is stressed always on the first syllable of words. It is remarkable that double letters or vowels which follow each other are pronounced separately and that certain double letters like Cs, Sz and Ty are indivisible. Thus, letters like ZS is pronounced J as in the French JEU, and the letter J is pronounced Y as in the English YES.
We invite you to listen to the pronunciation of the letters by clicking on the following link: Hungarian alphabet with audio. 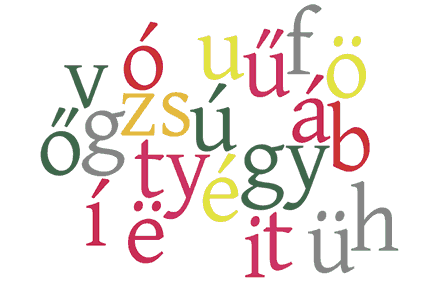 Jeffrey Cable :  It is a good introduction to Hungarian. I am having difficulty getting the microphone to work. I am using a Mac running Big Sur. I wonder what I am not doing correctly. Can you help me please?
Loecsen: : Could you try this please: support Google

The problem seems to be that loecsen.com is not allowed to use the microphone in your Chrome settings.

Neville :  Hi, First thanks for the work you have put into this project, a very nice site that I have started to visit daily. Unfortunately I like some others am struggling with the speed of the voices, is there possibly a function that could be added that would break words down into their “building blocks” i.e. their syllables first and then to be said at full speech speed. I do understand that this may take a lot of work/time/effort but I think it would help the teaching ability of the site enormously. Regardless of that once again thank you for making this grand resource available.
Ikrom.R. :  Sziastok! Ikrom Vagyok. O'rvendek. I am Ikrom From Russian. I want to learn and practice Hungarian with origianl hungarian person. Instead of that, I can teach Russian or Korean. Can teach English only for whom, who can't speak well. If you are interested, please contact me. E-mail: [email protected] phone: +79605259660 [whatsupp, telegram, zalo, cacao, wechat, viber, imo available] Thank you .
Phuong :  Thank you very much for the highly useful materials! It'd be even greater to have dialogues and videos in Hungarian with subtitles.
Elziftawy Mohamed  :  Thank you so much for that nice site, it's a little limited of sentences, but very useful, if more contents can be added will be great. Good luck
Adie :  I have just started learning Hungarian in the last 4 months, and have only today discovered this site. Very good, thank you! -Adie
Mary :  Thank you for this site. I am of Hungarian decent and heard it spoken during my childhood, however I would like to slow the pronunciations down a bit to get it correct. I would like a bit more content as well. Koszonom szepen
Vincent Lachance :  Great way to learn the basics, but a little more content would be nice!
Marika :  I absolutely love and am grateful for the site. I just wish there were a slower speed to heat every syllable of the sentence, then hear it at normal speed. It is hard to get the pronunciation correct at that speed.
Jenii Ravindran :  I enjoyed your teaching lessons.Thank you very much for your effort.My friend is a hungarian.Now I can speak little hungary language.Slowly I will learn hungary nicely.Once more thank you very much.
Show comments ( + )