How to learn Persian by yourself? Start with an easy and free online course!

We have adopted an objective and efficient approach to learn how to speak a language easily and quickly: we suggest you to start by memorizing words, phrases and practical expressions that you can use in everyday life and that will be useful when traveling.
Getting used to pronounce words out loud, numbers for instance, is an easy exercise that you can practice often and at anytime throughout the day.
It will help you to get used to the sounds of your chosen language and thus make it more familiar.
And once your holidays have begun, in Tehran, on Kish Island or elsewhere, you will be surprised how familiar and easy to understand it will seem.
Furthermore, using a pocket dictionary is always useful, particularly during a trip. It enables you to find the translation of new words and enrich your vocabulary.

Why speak Persian while traveling?

A language of different cultures

The official language of Iran, Persian has sister languages ​​with which it is intelligible, two of them being Dari, the official language in Afghanistan, and Tajik, the official language of Tajikistan. Together, the three languages ​​are spoken in Bahrain, Iraq, Oman, Qatar, Tajikistan, the United Arab Emirates, Iran, Pakistan, Kyrgyzstan, Turkmenistan, Uzbekistan, Kazakhstan, Azerbaijan and in Russia.
A major producer of oil and natural gas, Iran is the 29th largest power in the world in terms of GDP, and 18th in terms of PPA. Previously known as Persia, the country has a cultural tradition dating back thousands of years. The Persian poets are among the most renowned in the world: Rûmî, Saadi and Hafez for example; miniatures or "illuminations" with their bright colors also have a global aura, as do Persian carpets - associated with luxury and tradition - or also Iran's cinematic creativity, with several directors having won important international awards in recent years.

Make a success of your stay in Iran

Also called Farsi, this language of the Indo-Iranian branch has a lexicon influenced by Aramaic, Greek, Arabic, Turkish, French and English. Its writing system uses the Arabic-Persian alphabet - while Tajik uses cyrillic characters - which reads from right to left, and has twenty-two consonants and six vowels. Also in the system of writing, it is notable that each letter has four variations determined by the connection (or not) with the preceding or following letters. This characteristic can be a little complicated when you first begin learning as the same pronunciation can be used for several letters or signs. Here are some examples:
The ژ : pronounced as the J in French.
The ر : R slightly rolled.
The ا : pronounced as the A of "garden" in English.
The ﻩ , ﻫ , ـﻪ and ـﻬ : pronounced as the H of « hat » in English. The first two must be used when the liaison to the right is forbidden, and the last two when it is necessary. 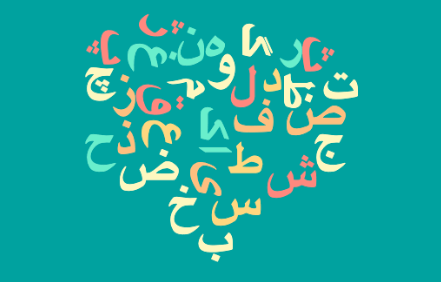