How to learn Turkish by yourself? Start with an easy and free online course!

We have adopted an objective and efficient approach to learn how to speak a language easily and quickly: we suggest you to start by memorizing words, phrases and practical expressions that you can use in everyday life and that will be useful when traveling.
Getting used to pronounce words out loud, numbers for instance, is an easy exercise that you can practice often and at anytime throughout the day.
It will help you to get used to the sounds of your chosen language and thus make it more familiar.
And once your holidays have begun, in Ankara, Istanbul or elsewhere in Turkey, you will be surprised how familiar and easy to understand it will seem.
Furthermore, using a pocket dictionary is always useful, particularly during a trip. It enables you to find the translation of new words and enrich your vocabulary.

Why speak Turkish while traveling?

A country which straddles East and West

At the crossroads of Russian, Mediterranean, Balkan and Middle Eastern cultures, the Turkish territory is of great importance in exchanges between these peoples, whether in economic, religious or cultural matters.
This strategic position has favored the presence of a multi-ethnic population who have built the cultural and linguistic wealth of Turkey through the mixture of Anatolian, Ottoman, Western and Oghuz cultures. Between tradition and modernity, this richness is manifested in the sumptuous architecture of palaces, mausoleums and mosques, in its literature, with authors such as Elif Şafak and Orhan Pamuk (winner of the Nobel prize for literature in 2006), the finesse of its music, or the diversity of its gastronomy, rich in pasta, meats, fish, vegetables and desserts.  Located mainly in Asia, the country is bordered by the Black Sea, the Sea of Marmara, the Aegean and the Mediterranean. The Turkish territory also has lakes, forests and two important mountain ranges.
While Ankara is the administrative capital of Turkey, Istanbul, the largest city, is the country's financial, economic and cultural capital.

Make a success of your stay in Turkey

An official language of Turkey and Cyprus, Turkish is spoken by more than 70 million people.
To learn the correct pronunciation of Turkish, it must be taken into account that it is an agglutinative language with a widespread use of suffixes. Although the alphabet is quasi-phonetic (it is pronounced as it is read), with letters that almost always correspond to the same sound, the language includes a complex system of vowel harmony that organizes the depth, rounding and aperture of vowels.

Here are some pronunciation guidelines to get you started in your studies:

The R is rolled, like the simple R in Spanish.
The L is always velarized as in English.
The K is pronounced as in French: it palatalizes before E, I, Ö, Ü.
The Ğ is not pronounced, it always appears after a vowel. At the end of the word or before another consonant, it lengthens the vowel that precedes it.
In Turkish it is necessary to pronounce all the letters, since the junction of two letters does not create a new sound.
We invite you to listen to the pronunciation of the letters by clicking on the following link: Turkish alphabet with audio. 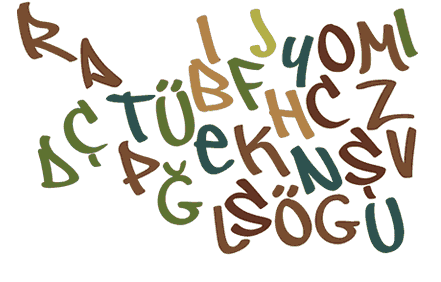 William Smiles :  Hi, A useful program with just one bug that I can find. When you are asked "She is out" or "He is out" the Turkish sentence is the same, as Turkish has no gender. In your program where both these options are shown at the same time and the Turkish sentence is shown twice, you should be able to pick either of the Turkish sentences and be correct. In your program one is definitely assigned to "He" and one to "She" meaning if you happen to pick the wrong one it is shown as a mistake - even though it is in fact correct. It is also true when going from Turkish to English - You have to get the right he or she. This just becomes a nonsense guessing game. It would be very confusing for anyone who was just learning Turkish / English for the first time. I suspect it would be very easy to correct. My Turkish is quite good and I struggled to complete this section because a seemingly wrong answer diminishes your score making it almost impossible to complete the exercise and get to 100%. Loecsen: thank you for your message. This problem is now solved.
Tomislav Crnkovic :  Merhaba, Hi! I start learning Turkish with this application and I like it very much, but when I want to learn numbers on Zero and two just looping numbers and never recognize and confirm the right answer. If you fix that app will be perfect! Many thanks for the effort and for helping people to learn language. Teşekkürler! Loecsen: We will correct this problem soon. Thank you for your encouragement!
Muhammad Umair :  Tesekkur ederim!excellent work...
Gideon :  Excellent start to the Turkish language. You still need to practice regularly, and learn the syntax.
Liza Fesakis :  This is a good way of learning on my own time. Now I can understand the series I watch on TV much better! Tesekkur ederim!
Zana :  I just started learn Turkish and I have to thank the guys who works on this website, thank you a lot.
Ebrahim :  Teşekkürler
Rana Rashad :  I like this site it's very helpful in teaching Turkish language! Thank you.
subhi :  I have been in Istanbul many times ,but I found that most of Turkish peoples don't know English ,so I hop this site will helped me to know some Turkish.
Grace :  The word "Please" should be listed in "Essentials" Is it listed anywhere in this site. Very wonderful site. Thank You.
Show comments ( + )