How to learn Russian by yourself? Start with an easy and free online course!

We have adopted an objective and efficient approach to learn how to speak a language easily and quickly: we suggest you to start by memorizing words, phrases and practical expressions that you can use in everyday life and that will be useful when traveling.
Getting used to pronounce words out loud, numbers for instance, is an easy exercise that you can practice often and at anytime throughout the day.
It will help you to get used to the sounds of your chosen language and thus make it more familiar.
And once your holidays have begun, in Moscow, St. Petersburg or elsewhere in Russia, you will be surprised how familiar and easy to understand it will seem.
Furthermore, using a pocket dictionary is always useful, particularly during a trip. It enables you to find the translation of new words and enrich your vocabulary.

Why speak Russian while traveling?

Are you fascinated by Russian literature? Why not read it in its original form? You will be surprised by the stunning nuances and subtleties in the works of great novelists such as Fyodor Dostoyevsky and Ivan Turgenev.

With more than 145 million inhabitants, Russia is the largest country on the planet, with a territory spanning north Asia as well as Europe. This vastness explains its varied landscapes, which go from Mount Elbrus - the highest peak in Europe - to Lake Baikal, through metropolises such as Moscow and the icy landscapes of Siberia. If the tourist attractions are numerous, so the economic ones are legion. Ranked in 16th place worldwide in terms of GDP, Russia is part of the BRICS and is one of the world's leading exporters of mineral and energy resources.
Having played an important role in European political, geographical and social issues since time immemorial, the country was a powerhouse in the twentieth century, allowing it to become a pioneer in many fields, most notably in space, the launch of Sputnik and the first man in space being prime examples.

Russian literature is recognized worldwide, thanks to heavyweight writers such as Nikolai Gogol, Fyodor Dostoyevsky, Leo Tolstoy and Anton Chekhov, acclaimed throughout the world.
It is also impossible to forget the great stars of Russian dance, such as Anna Pavlova and Mikhail Baryshnikov, and the famous dance schools, in particular the Bolshoi ballet.
Are you drawn to its booming business world, its dazzling landscapes and rich culture? Don't wait a moment longer to dive into the Russian language!

With more than 280 million speakers, Russian is present in more than 20 countries in the world, being the official language of 8 states and regions. Written with 33 letters of the cyrillic alphabet, the language is accentuated, where the accent conditions the pronunciation of vowels, since the unaccented ones are short and reduced. Another feature is the fact that most consonants represent two phonemes, one velarized and the other palatalized. The written form of the vowel which follows it determines the phoneme used.
Roughly speaking, Russian is written as it is pronounced, with some exceptions.
We invite you to listen to the pronunciation of the letters by clicking on the following link: Russian alphabet with audio. 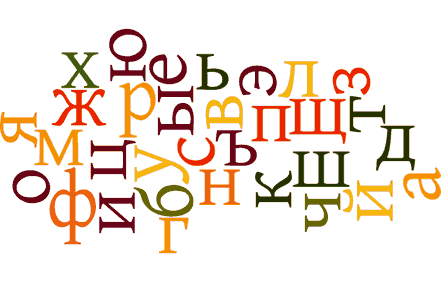 Natia :  I think the Georgian language is also interesting and I want people to know about Georgian culture and language. Think about it. But also I love Russian and this website is the best for learning. Thank you for being so kind .მადლობა
Cqri Dodd :  Love your site. But tonight everytime I pull into the Russian Colors it jumps into the colors in German. I have tried & tried but I cannot get the colors in the desired language. Thx! Loecsen : bug fixed, thank you!
JACKSON :  I stumble upon this website, but this was wonderful because I had the great chance to increase my knowledgements in russian language... MY CONGRATULATIONS!
Aniah lara :  I love this website you can learn so much from it. You can learn that language fast and fluently.I heard about this website from my friends they said it really does work!!! The day i first tryed it it was a little bit rough. But the good thing is it really does work you may not get, it at first but the first thing that came up to my mind was KEEP ON TRYING and now i am bilingual
Lila :  Amazing website. I love it so much. I am currently learning russian, and this website is the best for learning. It gives the written version in both the english alphabet and also the current language, as well as having a native speaker (both Female and male) speak it for you, and the translation :)
Show comments ( + )