How to learn Burmese by yourself? Start with an easy and free online course!

We have adopted an objective and efficient approach to learn how to speak a language easily and quickly: we suggest you to start by memorizing words, phrases and practical expressions that you can use in everyday life and that will be useful when traveling.
Getting used to pronounce words out loud, numbers for instance, is an easy exercise that you can practice often and at anytime throughout the day.
It will help you to get used to the sounds of your chosen language and thus make it more familiar.
And once your holidays have begun, in Yangon, Bagan or elsewhere in Burma, you will be surprised how familiar and easy to understand it will seem.
Furthermore, using a pocket dictionary is always useful, particularly during a trip. It enables you to find the translation of new words and enrich your vocabulary.

Why speak Burmese while traveling?

A destination of many natural and religious sites

Bordered by the Andaman Sea and the Bay of Bengal, Burma - also called Myanmar - is the largest state in mainland Southeast Asia. Burma shares borders with India, China, Bangladesh, Laos and Thailand, countries that have significantly influenced the creation of a diverse culture. In fact, there are many ethnic and cultural minorities in this country.
As Buddhism is the most widely practiced religion, the country has many majestic temples and pagodas that attract visitors from around the world, who come to admire Inle Lake or the Hpa-An region, the royal towns of Mandalay, its mountainous areas (which sometimes resemble those of Switzerland!), and its beautiful coast, lined with islands.

Make a success of your stay in Burma

It will be necessary to master the tones - which are an essential component of this language.
A language which is isolating (its words are invariable) and agglutinative (morphemes with a specific meaning are added to words), Burmese is also a tonal language, with three tones: high, low and descending. These tones distinguish words, hence their importance.
Among the useful tips for learning the pronunciation of Burmese, we can point out the fact that the R has almost disappeared, today pronounced J, and the presence of aspirated unvoiced consonants (consonant + aspiration).
Here are some other examples of pronunciation:
The W is pronounced as the W of "what" in English.
The H is pronounced aspirated as in English.
The ɲ is pronounced GN, as "campagne" in French.
We invite you to listen to the pronunciation of the letters by clicking on the following link: Burmese alphabet with audio. 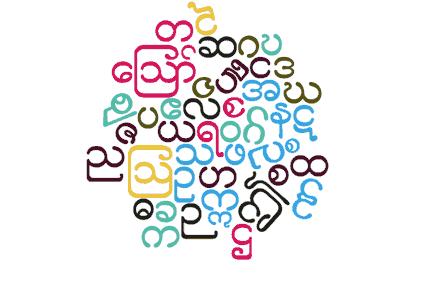 sheila kirwan  :  I go to Myanmar for meditation and as such would love to learn phrases associated with meditation ...how to talk to monks etc
Dustin :  Wow. As an English speaker, I can hear definite differences between many of the alphabet's letters, but they are so subtle and unused in the languages I speak that I feel I have no hope of reproducing them in my own speech.
Todd  :  This website has been great, but for some reason it is all messed up the last couple of days and not working properly. Loecsen : I think you need to refresh your cache.
Ershad :  The Burmese alphabet is't shown here.what should i do? Loecsen: Burmese alphabet with audio
Nyo Nyo :  Very helpful. Some pronunciations are different . Our language is tone language and if your tone is different.. spelling will be different and also meaning will be different. for example.. dance = က / ka./ cover=ကာ /ka / car= ကား / ka: / But this site is very helpful for my teaching. Thanks very much and have a nice holidays!!!
D.Dissanayake :  The Burmese lessons are quite clear and easy to learn .I followed the first lesson with interest. Certainly these lessons would be helpful for those who wish to travel in Myanmar.Thank you so much!
Show comments ( + )