How to learn Swedish by yourself? Start with an easy and free online course!

We have adopted an objective and efficient approach to learn how to speak a language easily and quickly: we suggest you to start by memorizing words, phrases and practical expressions that you can use in everyday life and that will be useful when traveling.
Getting used to pronounce words out loud, numbers for instance, is an easy exercise that you can practice often and at anytime throughout the day.
It will help you to get used to the sounds of your chosen language and thus make it more familiar.
And once your holidays have begun, in Stockholm, in Umeå, or elsewhere, you will be surprised how familiar and easy to understand it will seem.
Furthermore, using a pocket dictionary is always useful, particularly during a trip. It enables you to find the translation of new words and enrich your vocabulary.

Why speak Swedish while traveling?

From Stieg Larsson's engaging literature, to Ingmar Bergman's metaphysical cinema, the reasons for learning Swedish are many. Voted the most democratic country in the world in 2008, and the greenest in 2014, Sweden is globally recognized for the quality of life of its inhabitants, ranking 14th place in 2014 in terms of HDI.
Recognized also as an example of peace and respect for human rights, the country is the seat of the nomination and awarding of the Nobel Prize. After all, Sweden is the home of other great names in science and culture, such as the group ABBA, Greta Garbo, Ingrid Bergman, Anders Celsius and Alfred Nobel.

An open window to Scandinavian culture

Spoken by more than 10 million people, Swedish is a Scandinavian language that has mutual intelligibility with Danish and Norwegian, and has the status of an official language in Sweden as well as in Finland.
Like to know more about the history and culture of the Northic countries, especially Sweden? Immerse yourself in learning Swedish right now!

Make a success of your stay in Sweden

Swedish is a language with a pitch accent, which distinguishes two tones (acute and grave) which are responsible for the differentiation of certain homographs.
Prosody, as well as the pronunciation of certain sounds like /r/, are among the elements that mark the difference between dialects. Counting 18 consonants and 18 vowels, half of which are short and half of which are long, the language of Larsson has 29 letters, including å, ž and š.
We invite you to listen to the pronunciation of the letters by clicking on the following link: Swedish alphabet with audio. 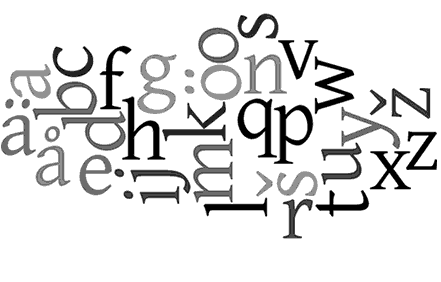 Reihaneh :  Hi, I am learning Swedish, I need to speak with someone to improve my speaking. I am native speaker of Persian and Dari. If anyone who can speak Swedish with me and want to learn Persian, I can teach him or her. This is my email address: [email protected] Thank you so much.
Cristina :  Thanks a lot,it help me too much,easy to learn and understand to speak swedish..now i need more practice, Godbless..
Gordana :  It is simply laid out, very important, particularly the alphabet
Romy Lauwers :  Why isn't there pink among the colours?
omema awan :  Once i had been in sweden but my marriage with a swehish citizen could not continue therefore i came to pakistan to my parents home.My elder son is a swedish citizen living in stockholm completed graduation in economics. I am living in Peshawar pakistan with my younger son .I teach him swedish language which i had learnt during 1980s. Many words i lave forgotten therefore i want reorintate me with the sweet languae of my past .Kindly help and gudie me in this regard.U tube in pakistan is band.Let me know other source of learning swedish language
Rafael :  I hope to learn Swedish Language with this Great Course. Thank you very much.
Bomjan kicker :  It would be great if you can add Vocabulary too this is just limit Thanks anyway, its pretty good for beginner
Alejandro :  Many many thanks. I bit complicated cause I´m Spanish mother tongue, but also funny at same time!! more free ideas like that should be supported and spread out! thanks again. b.rgds.. Alejandro
buhler :  hi,i have my anty there and i would really like to suprise her and i do not know may be she wil invite me there one day
Marianne Kraaijeveld :  Good Afternoon/God Afton ! Thank you ! This is so very special, very clear ! I am really enjoying the Swedish ! Kind regards & ha en bra dag ! Marianne Kraaijeveld.
Show comments ( + )