How to learn Armenian by yourself? Start with an easy and free online course!

We have adopted an objective and efficient approach to learn how to speak a language easily and quickly: we suggest you to start by memorizing words, phrases and practical expressions that you can use in everyday life and that will be useful when traveling.
Getting used to pronounce words out loud, numbers for instance, is an easy exercise that you can practice often and at anytime throughout the day.
It will help you to get used to the sounds of your chosen language and thus make it more familiar.
And once your holidays have begun, in Yerevan, on the shores of Lake Sevan or elsewhere, you will be surprised how familiar and easy to understand it will seem.
Furthermore, using a pocket dictionary is always useful, particularly during a trip. It enables you to find the translation of new words and enrich your vocabulary.

Why speak Armenian while traveling?

Are you passionate about twentieth century cinema? Embark on the discovery of this language and experience the cinematic masterpieces of Sergei Parajanov!
Let yourself be carried away by the rich cultural heritage of one of the oldest civilizations in the world, acquainting yourself with its beautiful monasteries, churches and chapels of ecclesiastical architecture. After all, Armenia was the first civilization to adopt Christianity as the official state religion, back in the year 301. This adoption was followed by the creation of its alphabet, inspired by Greek in approximately the year 406 by the monk Mesrob Mashtots: it has 32 consonants and 6 vowels.
By developing literature as early as the third century, the early works in this language attract the interest of scholars and others, curious about the weatern and eastern antiquity. The literary revolution of the nineteenth century gave birth to important writers like Raffi and Demirdjian and, as a result of the diaspora in the twentieth century, there are a large number of artists of Armenian origin around the world, such as Charles Aznavour and the group System of a Down.
Spoken by more than 7 million people in the world, this language could be what is missing from your CV. Don't wait any longer to get started!

Make a success of your stay in Armenia

Spoken by more than 7 million people on the planet, including 3 million in Armenia, this Indo-European language is the only one of its kind. Its resemblance to ancient Greek and its ties to Germanic languages ​​give it some particular characteristics, such as being more agglutinative than inflectional. Apart from that, its pronunciation is always consistent with the spelling, and the tonic accent is always on the last syllable of the word; two of the rules which will help you to understand the phonetics of this language.
We invite you to listen to the pronunciation of the letters by clicking on the following link: Armenian alphabet with audio. 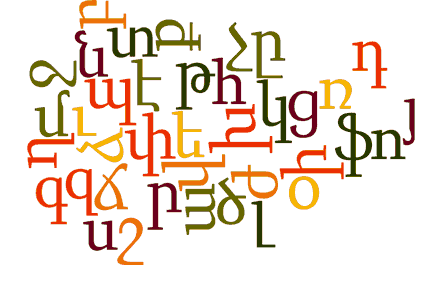 NIHAT ARTER :  Very helpfull for me. Thanks a lot.
Connie Koumjian :  Can you add more? Beef it up? I am sure there would be contributors... could Heyeren be the next Transparent Language or added to Duolingo?
Show comments ( + )