How to learn Polish by yourself? Start with an easy and free online course!

We have adopted an objective and efficient approach to learn how to speak a language easily and quickly: we suggest you to start by memorizing words, phrases and practical expressions that you can use in everyday life and that will be useful when traveling.
Getting used to pronounce words out loud, numbers for instance, is an easy exercise that you can practice often and at anytime throughout the day.
It will help you to get used to the sounds of your chosen language and thus make it more familiar.
And once your holidays have begun, in Warsaw, Krakow or another Polish city, you will be surprised how familiar and easy to understand it will seem.
Furthermore, using a pocket dictionary is always useful, particularly during a trip. It enables you to find the translation of new words and enrich your vocabulary.

Why speak Polish while traveling?

This language will open doors to the original versions of works by a large number of playwrights, musicians and directors of international renown.

A country of tourism and culture

As a member of the European Union, the WTO, the UN and other international organizations, Poland has fourteen UNESCO World Heritage sites in its territory, including Auschwitz-Birkenau, the historic centers of Krakow and Warsaw, the Castle of the Teutonic Order in Malbork, and the Białowieża Forest. The Polish territory is also dominated by major rivers such as the Vistula and the Oder, and by numerous lakes, mountain lakes, mountain ranges and the Błędów desert.
In the field of the arts, Poland distinguishes itself by the quality of playwrights like Leon Schiller, Jerzy Grotowski and Krzysztof Warlikowski. Poland's music is dominated by figures such as Frédéric Chopin, Henryk Górecki and the group Vader; and its cinema has influenced global cinematography thanks to directors such as Roman Polański and Andrzej Żuławski. Other prominent Polish personalities who have made an impact on the world include Nicolaus Copernicus, Marie-Curie and Wisława Szymborska.
Beyond all the tourist and cultural attractions, the country is also a business destination as its rapid growth has put it into eighth place in the ranking of the economies of the European Union in terms of GDP, and twenty-fifth place in the world.

Make a success of your stay in Poland

With about 55 million native speakers, Polish is the official language of Poland and a language spoken in several countries of the world; including the United States; Germany, Brazil, the United Kingdom, etc., making it the second most widely spoken Slavic language in the world.
The language is written with the Latin alphabet enriched with diacritics, and phonologically has eight vowels and 35 consonants. In order to be able to pronounce Polish correctly, it is useful to know that the emphasis is usually on the penultimate syllable of a word and that the "soft" (palatal) consonants are either marked by an acute accent or followed by an i.
We invite you to listen to the pronunciation of the letters by clicking on the following link: Polish alphabet with audio. 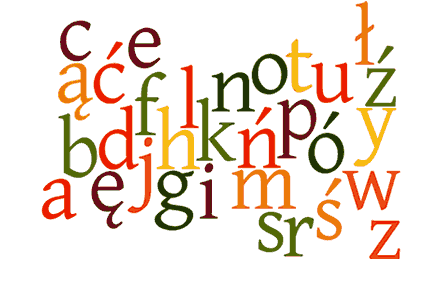