Hello
Good evening
Goodbye
See you later
Yes
No
Please!
Thanks
Thanks a lot
Thank you for your help
Don't mention it
Ok
+ When it is a man who speaks
How much is it?
Sorry!
I don't understand
I get it
I don't know
Forbidden
Excuse me, where are the toilets?
Happy New Year!
Happy birthday!
Happy holiday!
Congratulations!

How to learn Greek by yourself? Start with an easy and free online course!

We have adopted an objective and efficient approach to learn how to speak a language easily and quickly: we suggest you to start by memorizing words, phrases and practical expressions that you can use in everyday life and that will be useful when traveling.
Getting used to pronounce words out loud, numbers for instance, is an easy exercise that you can practice often and at anytime throughout the day.
It will help you to get used to the sounds of your chosen language and thus make it more familiar.
And once your holidays have begun in Athens or another Greek city, you will be surprised how familiar and easy to understand it will seem.
Furthermore, using a pocket dictionary is always useful, particularly during a trip. It enables you to find the translation of new words and enrich your vocabulary.

Why speak Greek while traveling?

A civilization rich in history and culture

It is impossible to talk about Greece without talking about its culture of today and yesterday. Be it for the ancient sculptures and architecture, or for the cinema of Theódoros Angelópoulos, this country's culture attracts passionate and curious visitors from all over the world.
Indeed, considered the cradle of Western civilization, the country has a rich heritage which persists in almost all areas of science and modern culture, particularly in the human sciences through philosophy and literature.
And you can be sure that even though they have been widely disseminated and translated into many languages, to know the works which inspired democracy and poetry in their original language could prove to be a pleasure beyond compare.

A country to know

The world's leading maritime power, Greece is a tourist-oriented country which receives around 15 million tourists each year, which equates to approximately 16% of its GNP.
Beyond the historic buildings and beautiful landscapes, millions of visitors also seek a typically Mediterranean cuisine, designated an Intangible Cultural Heritage of Humanity by UNESCO. In Greece the cuisine is distinguished by the use of local ingredients, although it has been influenced by the different peoples and civilizations who have lived in the region.
Apart from all these reasons, learning Greek will facilitate your travels to other countries in the region, such as Cyprus (where it is an official language) and in Italy.

Make a success of your stay in Greece and Cyprus

The only survivor of the Hellenic language family, modern Greek - also called Demotic - has between 15 and 22 million speakers, mainly in Greece and Cyprus, but also in Turkey, Italy, Hungary and other countries.
The Greek alphabet may seem difficult at first, mainly because several letters or groups of letters are pronounced the same way, but some comparisons with your mother tongue or other languages you have learned will certainly help you to pinpoint the correct pronunciation of the language.
Here are some examples:
Ρ, ρ: must be pronounced rolled like the Italian R
Θ, θ: pronounced like the English TH, as in THINK
Δ, δ: pronounced like the English TH of THIS
ΟΥ, ου is pronounced [ou]: like the French OU
We invite you to listen to the pronunciation of the letters by clicking on the following link: Greek alphabet with audio. 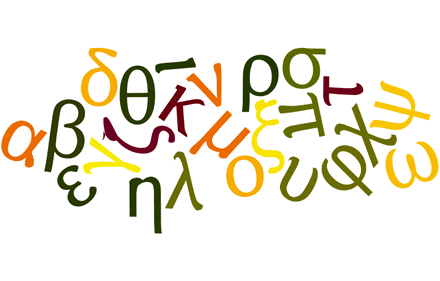 Frank Johnson :  Is there a way to slow down the speech of the native speakers?
Loecsen: Yes, you have to click on the button next to the "Play" button.
Ken Ward :  I began studying Greek several months ago. It's about the twelfth language I have studied, so I am a fairly experienced learner of foreign languages. I like this site very much. The speakers speak fast, which is good training. One question I have, though, is that the male speaker tends not to pronounce the 'n' sound in 'pende' (five) and in many other words ('saranda' for example, whereas the female speaker does pronounce the 'n' sound. Is this a normal difference between male and female speakers or is this peculiar to the two speakers for this site?
Louis :  Bravo pour ce site! J'ai révisé mes connaissances en italien et espagnol et j'ai surtout appris à me débrouiller en grec et à lire! 2 voyage en Crête, 1 circuit en Grèce et je révise pour un prochain séjour à Rhodes. Merci pour votre aide !
ahmet :  Çok beğenerek takip ediyorum. sağolun varolun.
John Elsegood :  First trip to Greece. Thank you for the basics. It will help a great deal
merriam :  As a woman who is now engaged with a Greek guy I find it essential for me to learn Greek. In order for me and my family to communicate.
byron kenard :  Awesome! I'm just starting to learn/understand the Greek language/culture, this website is great for helping us beginners understand those different accents/breathing marks that are a must when speaking in Greek. thanks-n-advance byron
Holly :  This Website is really helpful and great for learning correct pronounciation, i would recommend it!
David Sanderson :  As a student of the bible and greek is one of the major language of the bible, am very interested in learning the greek language. This site is the answer to my needs.
Mila :  very useful. I'm going to Greece in a week and I want to know as much as possible. Thanks!
Show comments ( + )