How to learn Vietnamese by yourself? Start with an easy and free online course!

We have adopted an objective and efficient approach to learn how to speak a language easily and quickly: we suggest you to start by memorizing words, phrases and practical expressions that you can use in everyday life and that will be useful when traveling.
Getting used to pronounce words out loud, numbers for instance, is an easy exercise that you can practice often and at anytime throughout the day.
It will help you to get used to the sounds of your chosen language and thus make it more familiar.
And once your holidays have begun in Vietnam, you will be surprised how familiar and easy to understand it will seem.
Furthermore, using a pocket dictionary is always useful, particularly during a trip. It enables you to find the translation of new words and enrich your vocabulary.

Here, we offer the language spoken in the north, while sometimes giving indications on the pronunciation in the south of the country (which has one less tone and a different accent), which obviously can pose a problem for a tonal language and make it somehow distinct even though its vocabulary is identical. Some innocuous words in the North can thus become serious insults in the South if they are badly pronounced! Here is an example in this conversation guide.

Vietnamese is relatively easy to learn, as the words are unalterable and the grammar is simple, without the presence of conjugations, declensions, irregular plurals and other features which normally pose a problem to foreigners eager to learn a language. On the other hand, the pronunciation of this language can be difficult to pin down at the beginning because of its tonal character with 6 distinctive tones between the words, which makes correct pronunciation crucial in order to make yourself understood.

Why speak Vietnamese when traveling?

The pleasure of discovering a tonal language

The pitch that is used to pronounce a word is as important as the word itself. This kind of vocalization on words serves to put them into context. Where the Chinese use 5 tones, the Vietnamese use 6! Learning a little of this language is a wonderful experience for language lovers as it is so melodic. Using it will help develop your ear and allow you to travel independently around the country.

Exceptional stays in a land of natural riches and cultural heritage

Vietnam is a very attractive tourist destination thanks to its tropical climate, its extensive coastline and the richness of its thousand-year-old culture.

Among the main destinations not to be missed are Hạ Long Bay and Phong Nha-Ke Bang National Park, two UNESCO Natural World Heritage Sites. Of course, the country also has other splendid landscapes such as the bay of Nha Trang. Cities like Huế - the location of the imperial city, which is also a UNESCO listed World Heritage Site - and the region of Đà Nẵng and its Cham Temples are other remarkable tourist destinations.

The importance of social position in Vietnamese grammar

Learning to situate oneself socially in relation to your interlocutor is essential for expressing yourself correctly in Vietnamese. Depending on the gender, age, relationship, level of familiarity, parental lineage etc., you will have to employ a different turn of phrase. To express yourself well is also to master a knowledge of manners, to which the Vietnamese are very sensitive.

However, do not be too alarmed, because it is accepted that a foreigner may not be able to master all these subtleties. So you should not get too stuck in your learning at the start - but it is certain that your true integration will only begin when you know how to use the determinants correctly. In addition, the modernization of Vietnamese society has accompanied a certain relaxation of these rules, which used to be codified in a very strict way: do not rely too much on old textbooks on this subject, nor on foreigners who learned the language a long time ago, not kept their language learning up to date, and try to persuade you that they know the authentic turns of phrase. Moreover, once you have overcome this barrier, you will find that the grammar of this language is simple - especially because all the words are invariable (there are no masculine or feminine words for example).

The formulations used in this table are extracted from the most frequent cases. Most expressions use the determinants "Anh" and "Em". If the person you are speaking with changes, simply replace the determinant proposed in our conversation guide by one appropriate to the situation by referring to the table below. The bottom of the boxes allow you to determine the gender of the speaker and the interlocutor: grey for the female, white for male. Finally, it is interesting to know that these determinants are all derived from the vocabulary of the family (little brother, big sister, grandmother etc.), which demonstrates how Vietnamese society is centered around the notion of a group.

Make a success of your stay in Vietnam

The current alphabet is based on a transcription of the language in Latin characters in the 16th century by missionaries from Portugal. It was preserved after decolonization and became the official administrative writing in 1954: this may seem surprising from a people who over the years have always shown a fierce desire for independence, but it reveals above all an authentic sense of pragmatism and a great openness of spirit, because importantly, this alphabet has facilitated the unification of different ethnic groups.

The alphabet is enriched with many diacritics used to specify the phonetic value of certain letters as well as their tone.

This language is tonal, which means that the meaning of a word can change depending on how the syllables are pronounced. It is therefore impossible to speak this language orally without audio support. Six different tones are used: neutral tone, rising tone, slowly descending tone, abruptly descending tone, a tone which descends then rises, and a tone which rises in two levels. It is difficult to say more about it here, because ultimately, at the same time as learning a word, you have to learn the tone which goes with it. The good news in all this is that this language is monosyllabic (each word is composed of a single syllable), and each word will correspond to only one tone (think of English where the stress can be at the beginning, middle or end of a word!).

We invite you to listen to the pronunciation of the letters by clicking on the following link: Vietnamese alphabet with audio. 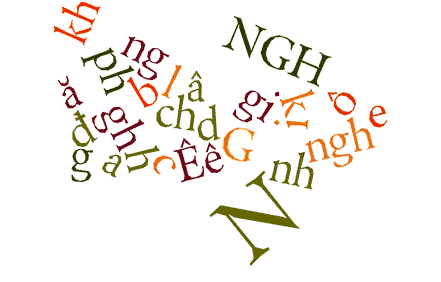 Sastrie Bharath :  These lessons have helped me navigate my way and bargain in Thailand, so I am now doing the Vietnamese lessons,they are extremely helpful
keith smith :  I like to study Vietnamese, some day i like to visit my home town in quang Ninh, lang bang.
Gavin Phan :  Hi, I\'m Vietnamese and I can help you learn Vietnamese language. Nice to know you! Facebook: https://www.facebook.com/gavinphan
Show comments ( + )