How to learn Japanese by yourself? Start with an easy and free online course!

We have adopted an objective and efficient approach to learn how to speak a language easily and quickly: we suggest you to start by memorizing words, phrases and practical expressions that you can use in everyday life and that will be useful when traveling.
Getting used to pronounce words out loud, numbers for instance, is an easy exercise that you can practice often and at anytime throughout the day.
It will help you to get used to the sounds of your chosen language and thus make it more familiar.
And once your holidays have begun, in Tokyo, Osaka or elsewhere in Japan, you will be surprised how familiar and easy to understand it will seem.
Furthermore, using a pocket dictionary is always useful, particularly during a trip. It enables you to find the translation of new words and enrich your vocabulary.

Why speak Japanese when traveling?

At the crossroads of tradition and technology

Formed by more than 6,500 islands, Japan is one of the world's largest economic powers, and companies such as Toyota, Honda, Canon, Panasonic, Sony and Nintendo are world famous. Investment in research plays an important role in many areas - including robotics - in which Japan is one of the most advanced countries in the world.
The quality of life in the land of the rising sun is one of its remarkable characteristics and reflects its place in the HDI rankings. Japanese life expectancy is very high.
In relation to tourism, the rich cultural heritage brings together the curious and passionate from all over the world, who come to see the country's natural and architectural heritage, such as Mount Fuji, imperial palaces, Buddhist temples and gardens, as well as museums where it is possible to discover the development of ceramics, calligraphy, literature and forging - including samurai swords.
The popular culture of the late twentieth and twenty-first centuries is also marked by the popularity of Manga and animations, not only in Japan and Asia, but also in many countries. In addition, Japanese gastronomy is also very popular and can be enjoyed around the world.

Make a success of your stay in Japan

It's easy, but you have to train yourself!

In the course of history, Japanese has been enriched by borrowing from other languages ​​such as Chinese and English. The graphic system is divided into two sets, the Kanji of Chinese origin and the Kanas, in turn divided into katakanas (used to write the words of foreign origin) and hiraganas.
Spoken by about 130 million people, the language is characterized by the importance of the formulas of politeness that depend both on the speaker and the subject matter.
The pronunciation of Japanese does not present great difficulties, but you must know the rules and keep training yourself. The vowel system contains the short vowels A I U E O.
Long vowels are formed by the contiguity of short vowels. There are no nasal vowels. There are also two semi-vowels, the Y and the W, which are always placed before the vowel.
The association of a consonant to the letter groups YA, YU and YO forms the voiceless consonants, such as KYA, SHU, CHO and PYU. Usually, consonants have only one pronunciation. It should be noted that the R will always be read as an L and that the W is pronounced like the OU in English.
We invite you to listen to the pronunciation of the letters by clicking on the following link: Japanese alphabet with audio. 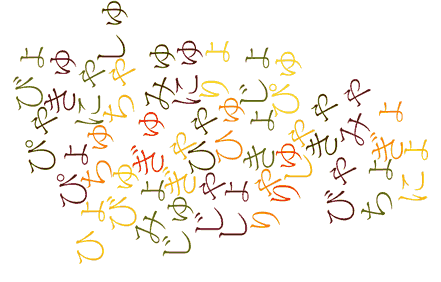 Grace :  I am interested to learn the Japanese Language. I learned a little about Japanese Hiragana, Katakana, and Kanji in the last few months. I wish to keep a continued focus ongoing. I am so excited!
japanese :  I will really appreciate this excellent article appropriate to my matter. Here is a deep description about the article matter which helped me more.

Jezzel Jocutan :  I really love to learn Japanese language. This website is so useful to me.
Jezzel Jocutan :  thanks I've learned a lot in just few minutes!
Phokat Wade :  Sugoi! Sugoi! I was searching for something just like this. Besuto for beginners.
Vijay :  Great Site, Thanks
Kylie :  Arigato! This is helping me so much!
Terrel Josey :  I like Japanese and this site is great
japanesequizzes.com :  These are the basic sentences for beginner Japanese students. Very useful !
TokyoGirl :  I love this website! It's very educational and, I almost know how to speak Japanese.
Show comments ( + )