How to learn Norwegian by yourself? Start with an easy and free online course!

We have adopted an objective and efficient approach to learn how to speak a language easily and quickly: we suggest you to start by memorizing words, phrases and practical expressions that you can use in everyday life and that will be useful when traveling.
Getting used to pronounce words out loud, numbers for instance, is an easy exercise that you can practice often and at anytime throughout the day.
It will help you to get used to the sounds of your chosen language and thus make it more familiar.
And once your holidays have begun, in Oslo or elsewhere, you will be surprised how familiar and easy to understand it will seem.
Furthermore, using a pocket dictionary is always useful, particularly during a trip. It enables you to find the translation of new words and enrich your vocabulary.

Why speak Norwegian while traveling?

A land of natural and social wonders

With around 5 million inhabitants, Norway is a dream destination, with its fjords, forests, glaciers and islands which inspire the imagination of many authors and screenwriters around the world.
Beyond these natural wonders, the country is extremely attractive to researchers thanks to its successful policies of social capitalism which have made it one of the richest and most developed nations in the world, being at the top of the HDI rankings and among the top 50 in terms of GDP.
With embassies in 86 countries around the world, and diplomatic relations with many others, Norway is a major player in international negotiations, mainly in regard to peace and diplomatic relations.

A rich language and culture

Composed of dialects, Norwegian has as official languages ​​Bokmål and Nynorsk. Linked to the Danish occupation period, Bokmål is the language of books and of administration, being present in urban areas. Nynorsk, on the other hand, is the heir to the language of the countryside, which has not suffered so much from the influence of the Danish crown.
Whether in one language or the other, during a visit to Norway you can immerse yourself in the works of great names of Western culture, such as the composer Edvard Grieg and the painter Edvard Munch.
So, do you dream of experiencing the dazzling landscapes of Norway, discovering the legends of the trolls or reading Ibsen's classics in their original language? Start learning Norwegian now with Loecsen!

Make a success of your stay in Norway

A language with a tonal accent, Norwegian has some peculiarities in its alphabet, which uses characters such as å, ø and æ. SJ, for example, corresponds to the CH or SH sounds in English.
We invite you to listen to the pronunciation of the letters by clicking on the following link: Norwegian alphabet with audio. 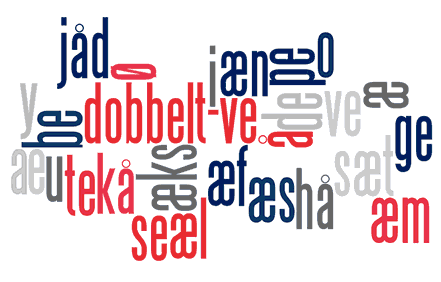 wiesÅaw :  bardzo fajna lekcja mozna sie szybko nauczyć
Walker #10290 :  wow I'm learning it fast. I want to learn it because it's a nice language
Sylvia :  I would like to learn some very helpful language for a trip to Norway. Audio would be extremely useful to learn HOW to pronounciate.
Aaron :  I use this website and other sources to learn Norwegian. What I really like about this site are the quizzes. They definitely help me learn! I'm confident in reading and writing Norwegian, as well as listening and understanding. This website really is a big help, and I thank the creators!
Graham :  Very user friendly, easy access to site.
Daniel Clatworthy :  OH, MY LORD! PICTURES! FINALLY NORWEGIAN LANGUAGES WITH PICTURES! Seriously, do you know how much this is gonna help me?
Fay :  Thank you very much for these free audio lessons... Sentences are grammatically simply built but well structured. This is the best place for one to learn Norwegian. I would like to learn more Norwegian with you!
Courtney :   I have been looking for a site to learn Norsk and this site is amazing! I am so happy I want to give the creators of this site a huge hug..... Thank you so so much!!! The best part it is truly free!! Thank you, from USA resident, Courtney
Audra :  I am learning Norwegian and wish to get acquainted with your materials. Mange takk.
Show comments ( + )