How to learn Slovak by yourself? Start with an easy and free online course!

We have adopted an objective and efficient approach to learn how to speak a language easily and quickly: we suggest you to start by memorizing words, phrases and practical expressions that you can use in everyday life and that will be useful when traveling.
Getting used to pronounce words out loud, numbers for instance, is an easy exercise that you can practice often and at anytime throughout the day.
It will help you to get used to the sounds of your chosen language and thus make it more familiar.
And once your holidays have begun, in Bratislava, in the High Tatras or in another city of Slovakia, you will be surprised how familiar and easy to understand it will seem.
Furthermore, using a pocket dictionary is always useful, particularly during a trip. It enables you to find the translation of new words and enrich your vocabulary.

Why speak Slovak while traveling?

You'd like to know more about Slavic culture, with its stunning landscapes, literary classics and gourmet dishes? Learn Slovak and you'll be closer to achieving your goals!

A member of the European Union since 2004, the UN, NATO and other international organizations, Slovakia is a growing European economy with many international industrial companies, including the giants of automotive production. In addition, the country has activities in agribusiness and the fields of energy, capital goods, electronics, coal, etc.
With a history closely linked to those of neighboring countries, this has had an effect on the Slovak language, which is relatively intercomprehensible with Czech and Polish. Its gastronomy is also strongly influenced by that of its Slavic, Austrian and Hungarian neighbors.
Tourism in Slovakia is a real attraction, as its diverse landscapes include the Carpathians with their popular skiing peaks, the beautiful lakes and valleys, the plains along the Danube, and its many castles and churches.

Are you an ice hockey fan? Discover the Slovak teams!

Slovak culture is dynamic, with important figures in almost every field, such as Alfonz Bednár and Peter Pišťanek in literature, and Edita Gruberová and Richard Müller in music. In addition, the Fujara flute (a traditional Slovak instrument) has been inscribed as an Intangible Cultural Heritage of Humanity by UNESCO since 2005.

Make a success of your stay in Slovakia

Spoken mainly in Slovakia, but also present in countries such as the Czech Republic, Serbia, Canada and Australia, Slovak is the language of more than 5.2 million people and is relatively intercomprehensible with Czech and Polish.
Using the Latin alphabet of 46 graphemes, enriched with diagrams and diacritic marks, the language is also characterized by declensions, the use of three genders (masculine, feminine and neutral), perfective and imperfective verbs, and a rich system of prefixes and derivation suffixes.
The pronunciation is marked by an accentuation always on the first syllable, by the existence of long and short vowels - which is distinctive of minimal pairs - and by the possibility of using R and L as vowels.
Here are some tips for correct pronunciation:
The ä appears only after the labial consonants (b, p, m, v).
The consonant v is pronounced [u̯] at the end of the syllable (except before n or ň). 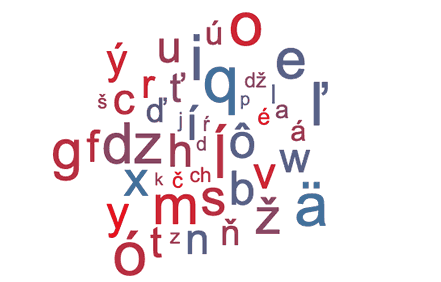 Elizabeth Claire :  This is wonderful How do you do it for free? I am of Slovak descent, but have had no contact with any slovak speakers since childhood, and never learned to speak it other than a few phrases. The sounds are lovely to me! The spelling easy, but the pronunciation really difficult.
Bridget :  Very helpful, thanks.
Kayla :  Great!
Show comments ( + )