How to learn Hindi by yourself? Start with an easy and free online course!

We have adopted an objective and efficient approach to learn how to speak a language easily and quickly: we suggest you to start by memorizing words, phrases and practical expressions that you can use in everyday life and that will be useful when traveling.
Getting used to pronounce words out loud, numbers for instance, is an easy exercise that you can practice often and at anytime throughout the day.
It will help you to get used to the sounds of your chosen language and thus make it more familiar.
And once your holidays have begun, in New Delhi or another city in India, you will be surprised how familiar and easy to understand it will seem.
Furthermore, using a pocket dictionary is always useful, particularly during a trip. It enables you to find the translation of new words and enrich your vocabulary.

Why speak Hindi when traveling?

An economic and cultural power

Spoken mainly in northern India, but also present in Pakistan and Nepal, Hindi is the official language of the country, with up to 450 million speakers, including 230 million as their mother tongue.
The second most populous country and the seventh largest in the world, India is one of the 10 largest world powers in terms of GDP and is a member of several international accords, including the BRICS.
Even though English is the official language of the country, speaking Hindi will be a great asset in conducting business in the country, as well as for visiting the architectural wonders of the Brihadeeswarar Temple and the Taj Mahal, for exploring the national parks and their wildlife and bathing in the waters of Goa.. Tourist hotspots are countless, but they do not supplant the popular culture of the country, whose personalities include writer Rabindranath Tagore, winner of the Nobel Prize for Literature in 1913, and whose Bollywood film production industry is one of the most prolific in the world.
Religious tourism is another point of interest, since India has a rich history that goes back thousands of years and has seen the birth of many religions practiced around the world today, such as Hinduism, Jainism, Buddhism and Sikhism.

Make a success of your stay in India

As an Indo-European language, Hindi uses the alpha syllabary (between a syllabary and an alphabet) Devanāgarī - syllables where the vowel can be modified or suppressed by ancillary signs - and Sanskrit characters that are written and read from the left to the right.
The Devanāgarī system consists of phonological oppositions of short and long vowels, aspirated and non-aspirated consonants, and dental and retroflex consonants. Additional diacritics will be of great help to pronunciation. Here are some examples:
Candrabindu (◌ँ ~): placed above the vowel marks its nasalization.
Visarga (:): placed at the end of a word, it indicates a sigh. 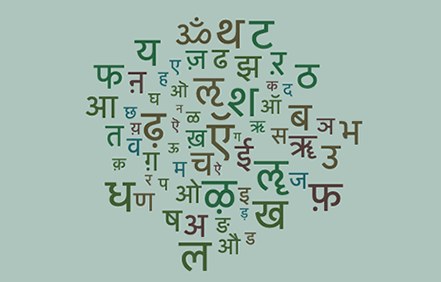 MOHAN ATTALURI :  Your site is well designed for easy learning and revision.

Christine  :  Thank you to let anyone learn this gentle language !
Skinny Vegetarian Rabbit :  This is the best Learn Hindi site. For years I had bought numerous"Learn Hindi in 30 days" book and the book pushed me hard to hate the language. That book was a book of breech birth labour pain. Your website should win the Padma Shri Award for making foreigners love India through its melodious language. Keep up with the good work. Appreciation would come to you in good time
Mukund Chaskar :  Namaste, I found Jyoti, Anita and Selena etc. who learn Hindi on this site. Anybody is interested in brushing up their Hindi skills ? you are welcome. I am willing to give you Hindi conversation practice. Pl contact without prejudice. Dhanaywaad / thanks, fir milenge / will meet again Mukund Chaskar
Neha P. :  Nice website for me to learn hindi! :)
Kathleen :  Very good but the audio vocabulary is too short.
baskar :  very helpful for people like me from non Hindi belt
Selena :  Looking forward to this. :)
Tchelle :  wonderful for beginners!
ANITA  :  Ideal
Show comments ( + )